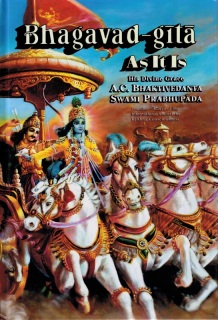 No other philosophical or religious work reveals, in such a lucid and profound way, the nature of consciousness, the self, the universe and the Supreme.

Bhagavad Gita As It Is is the largest-selling, most widely used edition of the Gita in the world.

Bhagavad-gita As It Is is more than a book. It is alive with knowledge and devotion; thus it has the power to change your life for the better.

Bhagavad-gita is knowledge of five basic truths and the relationship of each truth to the other: These five truths are Krishna, or God, the individual soul, the material world, action in this world, and time. The Gita lucidly explains the nature of consciousness, the self, and the universe. It is the essence of India's spiritual wisdom, the answers to questions posed by philosophers for centuries.
FOR ENGLISH BOOKS PLEASE CLICK HERE
Add to Cart